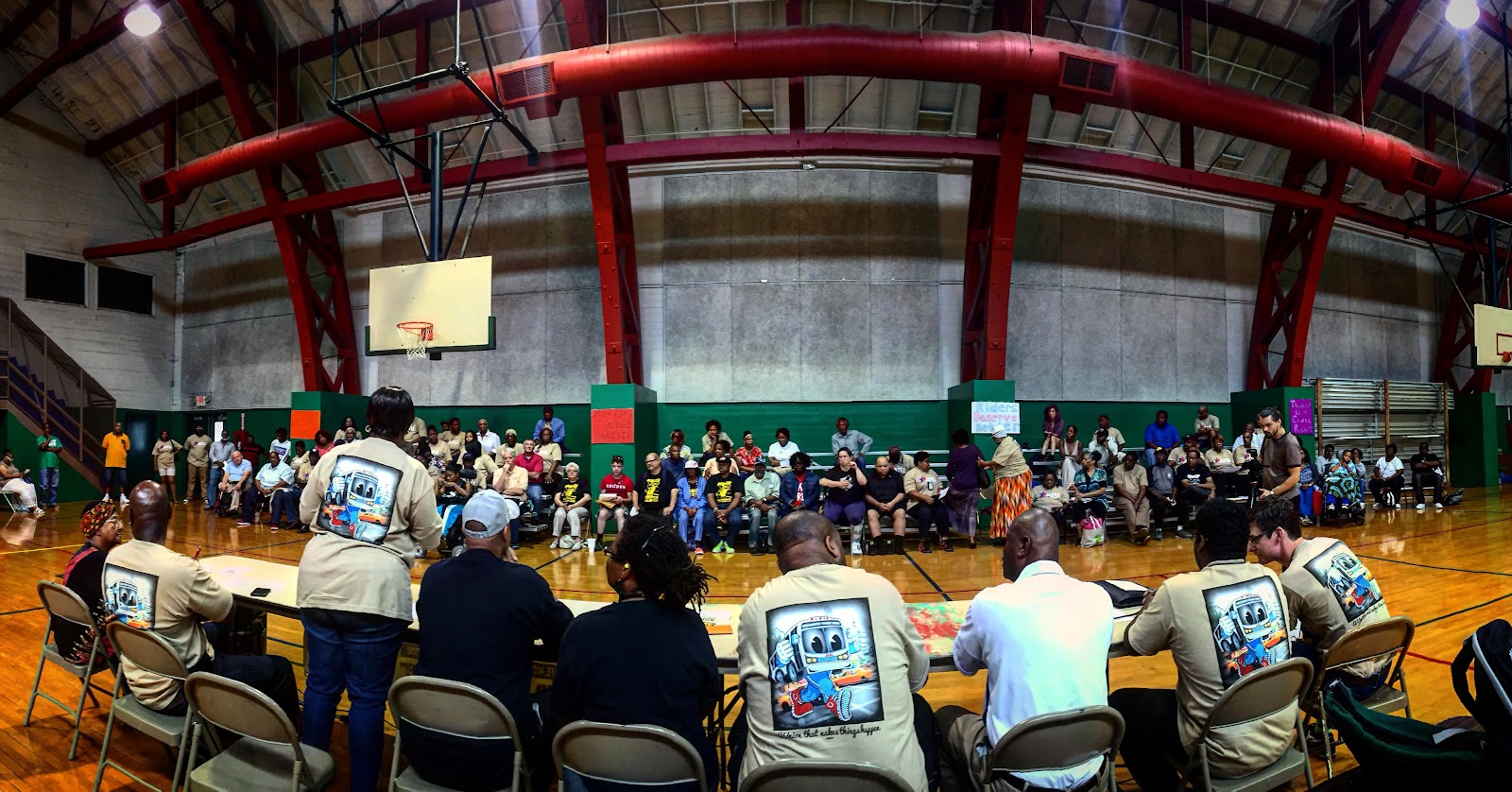 Memphis, TN—The  Memphis Bus Riders Union and Amalgamated Transit Union Local 713 are  launching a new campaign with a petition to restore the 31 Crosstown, a  historic bus route eliminated by Memphis Area Transit Authority in 2013.  The two groups represent hundreds of  MATA drivers and riders who say  that "the route was a lifeline" for under served neighborhoods in North and South Memphis.

The  campaign hopes to revive MATA’s ridership by restoring the service that  current riders want. Willie Barber, Business Agent for Local 713 says  that public opinion of MATA can be repaired by reinstating the 31.

“Any bus rider will tell you how important this route is. MATA’s own reports show the 31 Crosstown had the third highest daily ridership of all the routes, about 2,600 passengers a day.  Because it went into the neighborhoods of Riverside and New Chicago,  areas where many households have no vehicle, and connected those  residents with resources as well as other major routes in Midtown.” he said. 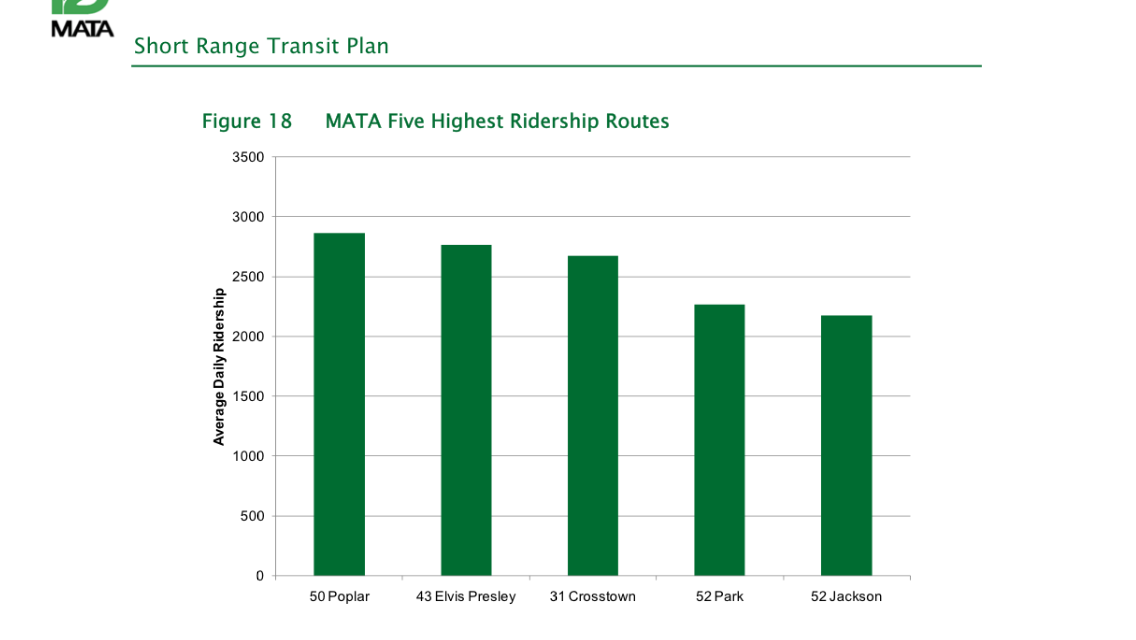 The  31 provided frequent service, running every 15 minutes during peak  hours, and served riders from 5am to 12pm. The petition calls for fully restoring the route to ensure that it’s many riders will return:

“We,  the undersigned, call for the immediate restoration of the 31  Crosstown, connecting the residential areas of New Chicago and  Riverview-Kansas. We demand service that is frequent, and operates  through the full duration of the MATA service day.” 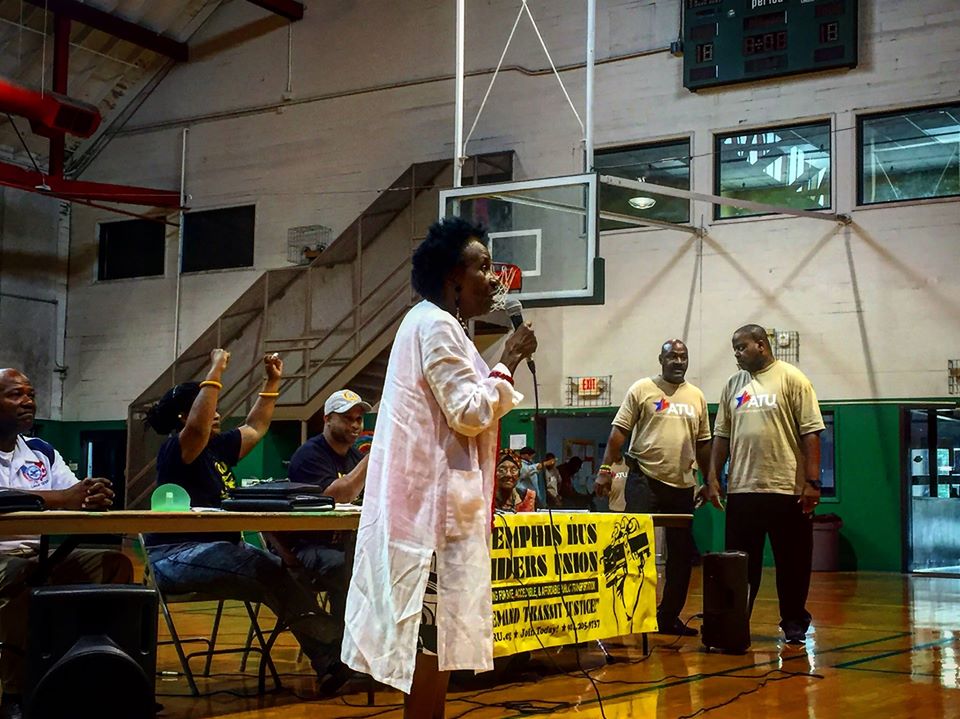 Rep. Barbara Cooper encourages us to fight for bus service. This and header photo by Schaeffer Mallory

The  unions believe that low enrollment in neighborhood schools is also connected to MATA service cuts. Students in the affected neighborhoods  are strained due to the recent closings of Northside and Carver High  Schools.

"I  worry about my son who walks almost 2 miles to Manassas every day,  without crosswalks or even decent sidewalks, when the 31 would have  taken him there safely" said MBRU Co-Chair Cynthia Bailey.

The importance of transit infrastructure to the economic stability of a community cannot be denied. As neighborhoods in North and South Memphis experience worsening segregation and poverty with every lost bus route, major developers in Downtown and Midtown solicit for transit funding to improve infrastructure around their projects.  The unions see their campaign as part of the solution to this form of systemic racism and inequitable development in Memphis.

“Public  transit is a civil right, and we must increase bus service for  low-income and minority residents to properly address racial and  economic injustice in Memphis. North and South Memphis deserve equal  access to our city.” the petition states. 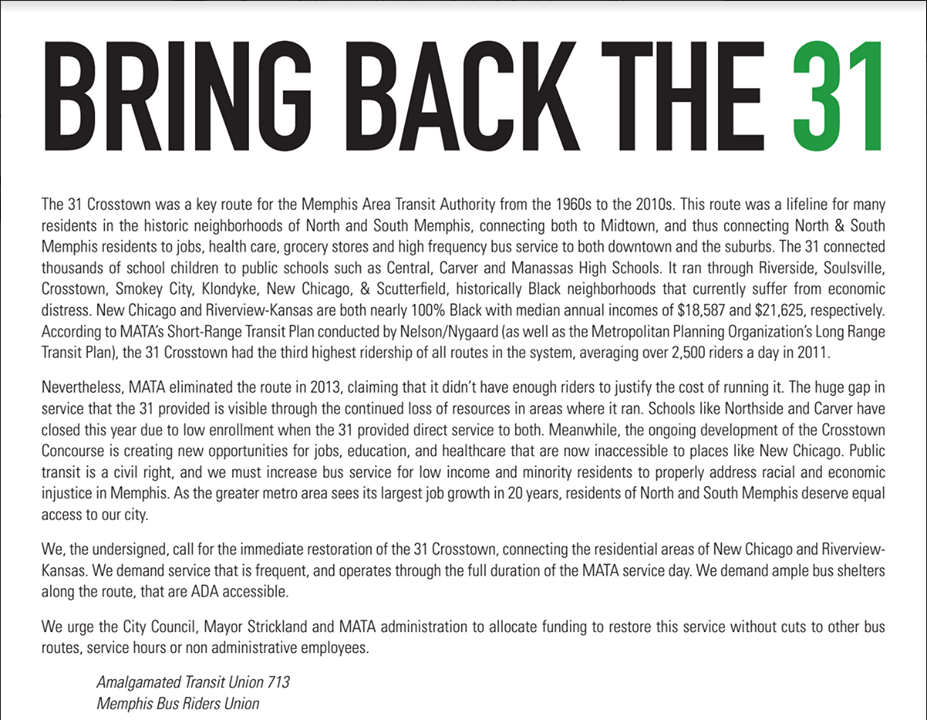 MBRU  and ATU Local 713 are holding a community event at New Chicago CDC to kick start the campaign. The event will be September 17th, at 1036 Firestone Ave, Memphis, TN 38107. For more information on the Memphis Bus Riders Union, visit mbru.org or contact them at 901-205-9737. For more on ATU Local 713, visit their Facebook page.
Tweet